In April there were significant increases in Queensland, Victoria and South Australia after drops in March. But NSW and WA saw significant decreases after increases in March. (With regard to TAS, NT and the ACT, SolarQuotes didn’t have enough data at the time of publishing this report to provide useful figures in those jurisdictions.) 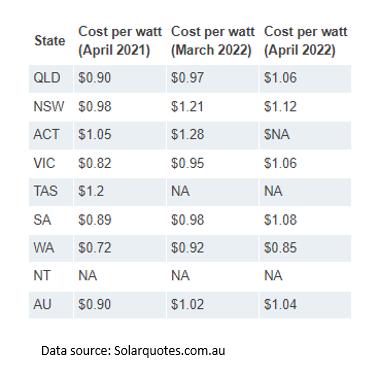 These figures are sourced from the SolarQuotes Australian Solar Price Index, a handy online tool that generates historical solar pricing in each state and nationally, along with filters for creating reports on various system capacities and components.

The figures above reflect costs for fully installed systems, inclusive of all rebates and up-front subsidies. April’s figures are based on details supplied by 286 purchasers at the time this report was prepared, who chose to indicate what they paid for their systems when submitting solar installer reviews. These submissions included reviews of installers not within the SQ installer network.

Note that the figures above and in the graphs below may change as they are generated in real-time as new reviews are submitted.

The following graph shows average cost-per-watt across all system sizes nationally going back to May 2020. 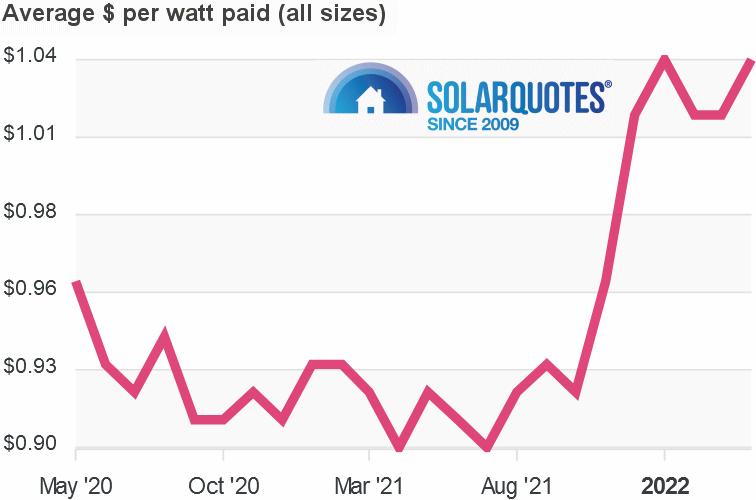 While many Australians are choosing to install larger systems these days, 6.6kW solar systems remain the most popular capacity choice. Here’s how costs have been tracking on this size over the past couple of years. 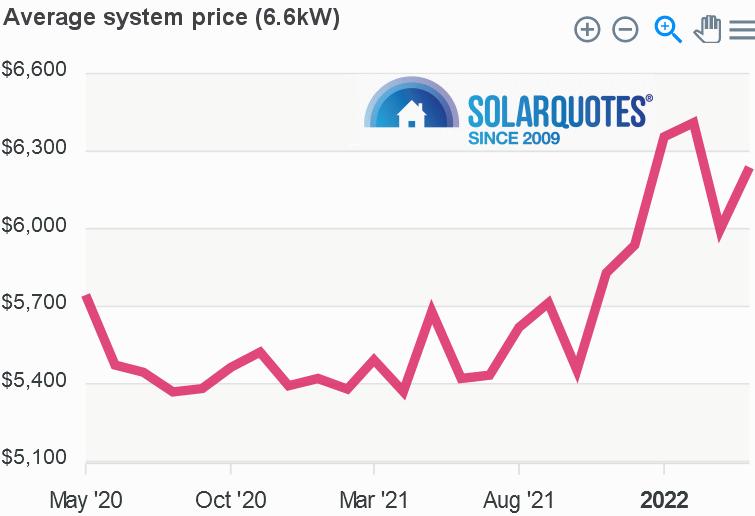 "There is no clear explanation for the price dip in March," SolarQuotes founder Finn Peacock notes. "There has been some chatter indicating Australian wholesalers purchased large quantities of panels a while back for expected orders that didn’t materialise – and then struggled to offload them. Perhaps this temporarily took the heat off panel costs, but that doesn’t really explain differences between the states over the last couple of months."

Electricity Prices – a New Solar Rush on the Horizon?

Higher electricity bills are looming for many Australian households due to continued upwards pressure on wholesale pricing and other factors, making solar a wise move to rein in energy costs, says Mr. Peacock.

"Any significant increase in electricity costs will likely see more demand for solar installations, and if current import and panel pricing issues persist, this could see system prices heading north. But the fact remains, the longer a household puts off installing panels, the longer it is locking in higher electricity bills."

SolarQuotes.com.au  is an independent online reviews website dedicated to linking solar buyers with the best solar providers in their area, using industry knowledge and the power of consumer feedback.

Since 2009, SolarQuotes has helped more than 600,000 Australians seeking quotations on solar systems from accredited suppliers in its network across 2,874 Australian postcodes.

Over the last 13 years, SolarQuotes has steadily built a network of 518 solar installers across Australia trusted to provide quality installations.

Its sole mission is to give consumers the advantage of informed choice from installers who have already been thoroughly vetted.

The SolarQuotes website is recognised as Australia’s most comprehensive and reliable source of information about home solar power and battery storage. It provides consumers with the advice and insight they need to go solar and, once installed, the best ways to maximise value from their systems.

To get an instant estimate on how much you could be saving on household energy bills by installing a solar power system, try SQ’s solar calculator. For an at-a-glance listing of pricing ranges for good quality systems, check out current solar panel costs.

Find out more at https://www.solarquotes.com.au/