Materials inspired by the colour changes in a peacock's feather could lead to anti-counterfeit and sensing applications.

Tsukuba, Japan, Jan 26, 2021 - (ACN Newswire) - Melanin-like compounds can be precisely designed and arranged to colour materials using a mechanism similar to that found in a peacock's feathers. Chemist Michinari Kohri of Chiba University in Japan reviewed the latest research on these 'melanin-mimetic materials' and their potential applications for the journal Science and Technology of Advanced Materials. 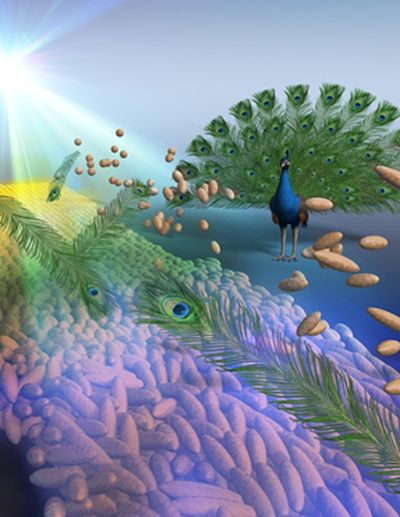 Scientists are developing materials inspired by the structural colours in a peacock's feathers. (Credit: Takashi Tsujino) 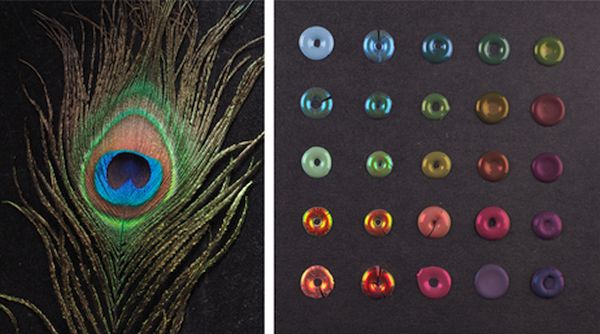 Melanin and melanin-like compounds absorb some of the light that is scattered from the microstructures within materials. Scientists are finding ways to control this phenomenon to give a variety of iridescent and non-iridescent colours. (Credit: Michinari Kohri)

Melanin is a dark pigment that gives hair and skin its colour. It is also essential for the bright colours we see in some organisms. When light interacts with the structures of feathers, wings and shells of many organisms, like peacocks, butterflies and jewel beetles, it is scattered, appearing white. But when melanin is interspersed within these structures, some of the scattered light is absorbed, producing various colours. Scientists are looking for ways to mimic these so-called 'structural colour' changes of living organisms in synthetic materials."Vivid structural colours can be obtained by constructing microstructures containing a light-absorbing black material made of natural or artificial melanin," says Kohri. "Research in this area is progressing rapidly worldwide."A leading contender is a compound called polydopamine. It is made of a material naturally found in the body, so it is biocompatible. It is also dark, so it absorbs light like melanin. Scientists found they could control polydopamine's iridescence - how much the colour changes as the angle of light hitting it shifts, similar to a peacock's feather. They achieved this by altering the particle size or by adding compounds that react to a magnetic field.Scientists are also investigating particles formed of a polystyrene core and a polydopamine shell. Changing the diameter of the inner core, for example, leads to different colours. Making the polydopamine shell thicker causes the particles to be less closely packed, leading to non-iridescent structural colour, which remains the same regardless of the light angle.Scientists have also toyed with controlling colour and angle-dependence by changing the shapes of polystyrene/polydopamine particles, making them hollow on the inside, and adding multiple coatings to the external shell.Polydopamine particles are showing potential for a variety of applications. For example, they can be used as inks to dye fabrics or in cosmetics. They could help prove a product is real versus counterfeit by shifting colour with strong light, wetting, or temperature changes. Finally, scientists have found that adding these particles to rubber causes it to change colour when stretched or relaxed, which could be useful for sensing local stress and strain in bridges.Further informationMichinari KohriChiba UniversityEmail: [email protected]About Science and Technology of Advanced Materials JournalOpen access journal STAM publishes outstanding research articles across all aspects of materials science, including functional and structural materials, theoretical analyses, and properties of materials.Chikashi NishimuraSTAM Publishing Director[email protected]Press release distributed by ResearchSEA for Science and Technology of Advanced Materials.

Science and Technology of Advanced Materials