Bogota, Colombia, Dec 21, 2020 - (ACN Newswire) - On December 17, BYD announced the delivery of 470 pure electric buses to Bogota, the capital of Colombia. This is the country's largest pure electric bus fleet, and also the largest bus fleet BYD has delivered in the Americas, which will effectively promote the already fast-growing electrified public transport systems in Colombia, Latin America and the entire Americas. 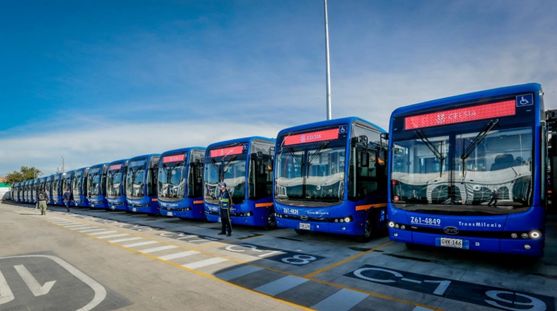 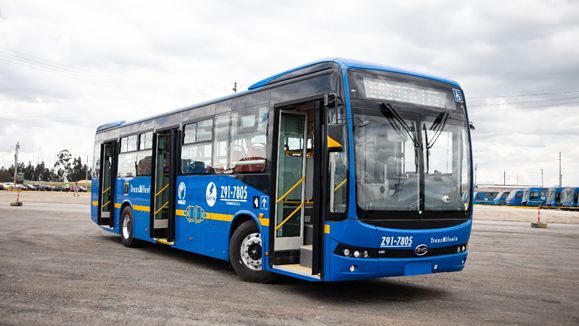 Each bus takes 1.5 to 2.5 hours to fully charge, with a cruising range that exceeds 300 kilometers on a single charge 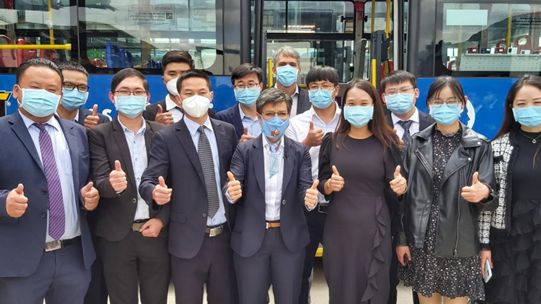 Claudia Nayibe Lopez Hernandez, Mayor of Bogota (fourth from left, first row) and Lara Zhang, Regional Director of BYD Latin America (third from right, first row) were among those in attendance at the delivery and operation ceremony

The Bogota City Government and the Bogota City Public Transport Authority (TRANSMILENIO S.A) held a grand launch and delivery ceremony for the first batch of 120 buses. This batch of buses will be delivered to 9 bus routes across the city by TRANSMILENIO S.A on December 26, 2020, and will serve approximately 69,300 passengers along the routes. The remaining 350 units will be put on the other 30 routes during the first quarter of 2021, by which time a total of 302,000 passengers can enjoy the zero-emission bus service.Also supporting the bus fleet is a charging station located in the Fontibon district of Bogota, which is equipped with 56 double-gun electric chargers with a power of 150KW. The construction of the charging station, the installation of the chargers and the power supply are handled by Codensa, a joint venture established by ENEL, an Italian power grid company and the Bogota Energy Group. When the buses and charging stations are officially put into operation, it is estimated that more than 400 job opportunities will be created for the local communities, including drivers, logistics and maintenance personnel.The 120 buses include 12-meter and 9-meter models, with a passenger capacity of 80 and 50 people respectively. They take 1.5 to 2.5 hours to fully charge, with a cruising range that exceeds 300 kilometers on a single charge, which can easily meet the buses' daily operating mileage of 260 kilometers. Compared with diesel buses, BYD's pure electric bus fleet will save 12,500 tons of carbon dioxide and 2.5 tons of dust particles from being emitted every year.In addition, each bus comes equipped with a driver safety cabin, TV, WIFI, security cameras, intelligent transport system, mobile phone charging USB interfaces, access platform for people with disabilities, and other people-centric features."Today is a historic day that we can record in the history of Bogota," said Claudia Nayibe Lopez Hernandez, the Mayor of Bogota: "This is thanks to the joint efforts of many talented Colombians. We want to buy more electric buses, preferably, that allow us to remove the old diesel and gasoline fleet, and renew it with clean, electric buses, providing more and better services for citizens."Felipe Ramirez Buitrago, General Manager of TRANSMILENIO S.A, briefly introduced the plans for charging stations and the significance of the fleet. "The Fontibon charging station put into operation today is the first pure electric bus charging station in Bogota. Three other charging stations will be put into operation in other districts of the city. By then, Bogota will operate a total of 483 pure electric buses, of which 470 will come from BYD. This is the largest pure electric bus fleet in the country, highlighting and consolidating Colombia's status as a model for environmental protection in Latin America.""Bogota is undergoing a historic moment," said Lucio Rubio Diaz, General Director of the Enel Colombia: "We are always committed to the transition to clean energy, and this project plays an important role. By building green and environmentally friendly charging stations, we have made a positive contribution to the sustainable development of Bogota, improving air quality for citizens, improving the quality of life, and providing more comfortable zero-emission travel services.""It feels really great that our dream come true," said Ricardo Sierra, President of Colombia's bus procurement company Celsia. "TRANSMILENIO S.A and Bogota City are leaders in electric buses, and they are setting an example for many cities seeking to develop zero-emission bus systems. I congratulate the citizens of Bogota, who will soon experience the unique charm of eco-friendly buses." This batch of 120 buses was purchased by Celsia and then delivered to the local bus operator Gran Americas Fontibon I SAS, with a concession duration of 15 years."During the pandemic, BYD has overcome all difficulties, completed production with quality and quantity and delivered on time," said Lara Zhang, the Regional Director of BYD Latin America. "BYD's dedication to zero-emission technology innovation fits perfectly with the commitment of the city of Bogota and TRANSMILENIO S.A to sustainable development." The buses were produced by BYD's bus plants in Nanjing and Hangzhou and then shipped to Buenaventura Port in Bogota."Today, Bogota is at the forefront of zero-emission public transportation," said Juan Luis Mesa, General Manager of BYD Colombia. "To demonstrate the all-round strength of the vehicle's range and driving performance, we took a bold approach: from the day the buses arrived at the port, we drove all the way to Bogota, covering about 500 kilometers along the way, passing through 4 cities, and people along the way were very surprised. We feel confident that the bus fleet has successfully attracted the attention of the public before it even begins operations, and they are eager to experience this new technology."BYD entered the Colombian market in 2012 and made several milestone achievements: building the first pure electric taxi fleet in South America in 2013, entering the Bogota BRT system in 2017. It's also delivered 64 electric buses to Medellin in 2018, and delivered 470 units for the largest pure electric bus fleet in Colombia in 2020.Throughout Latin America, BYD's new energy vehicle footprint has spread to major markets including Chile, Colombia, Ecuador, Brazil, Costa Rica, Uruguay and Argentina. The brand has gained market praise for its remarkable environmental benefits and reliable quality, and continues to promote the electrified public transportation across the Americas. Globally, BYD's green transport offerings have spread to over 300 cities, operating in more than 50 countries and regions.About BYDBYD Company Ltd. is one of China's largest privately-owned enterprises. Since its inception in 1995, the company quickly developed solid expertise in rechargeable batteries and became a relentless advocate of sustainable development, successfully expanding its renewable energy solutions globally with operations in over 50 countries and regions. Its creation of a Zero Emissions Energy Ecosystem - comprising affordable solar power generation, reliable energy storage, and cutting-edge electrified transportation - has made it an industry leader in the energy and transportation sectors. BYD is listed on the Hong Kong and Shenzhen Stock Exchanges. More information on the company can be found at http://www.byd.comContacts In Asia-Pacific: Richard Li[email protected]; tel:+86-755-8988-8888-69666In North America: Frank Girardot[email protected]; tel: +1 213 245 6503In Europe: Penny Peng[email protected]; tel: +31-102070888In Colombia: Lara Zhang[email protected]; tel: +57-3188216395