Daegu has suffered greatly by the new kind of coronavirus infection (COVID-19). Starting with the confirmed infection of COVID-19 by a congregation member in the Shincheonji Daegu Church in mid-February, the cumulative number of patients is 6,926 as of the 10th of this month. Of the total cumulative patients, 4,265 are Shincheonji congregation members. This is why the word "Shincheonji" is always mentioned at the centre of the spread of COVID-19 infection. 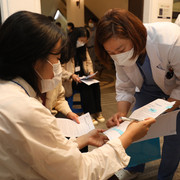 500 members of the Shincheonji Daegu Church, who were infected with COVID-19, started to donate blood plasma stating, "We wish to repay the grace of receiving the treatment." This started from 9 a.m. on the 13th, as they got on three "blood donation buses" from the Red Cross standing in front of the main gate of Kyungpook National University Hospital in Daegu. The mass blood plasma donation of the congregation members will continue for five days. The mass blood plasma donation accelerated after a letter of appreciation written by Lee Man-hee, the Chairman of Shincheonji, Church of Jesus. On the 27th of last month, Chairman Lee sent a special thank-you letter to the congregation members of the church who were cured of COVID-19 and expressed their intention to donate blood plasma to develop the treatment.

"I was pleased to hear that you expressed your willingness to voluntarily participate in blood plasma donation for the development of the COVID-19 treatment. Our saints have received the blood of Jesus, the Son of God. I know that we have gathered our hearts to make the world free from the pain of COVID-19 by giving blood as Jesus has done so," he wrote.

There is also a negative opinion on the mass donation of blood plasma of the congregation members. It is because this mass blood plasma donation is occurring at a time when Shincheonji is being audited by the National Tax Service over the COVID-19 incident and has come under the scrutiny of the investigative agency due to the issue arisen from the list of congregation members submitted. It is pointed out that Shincheonji may be trying to change its image through a kind of "service activity." A housewife in her 40s who met in front of Daegu City Hall said, "I'm worried if it's to improve their image. In particular, if it is a treatment made with the plasma of believers of Shincheonji, some religious groups may not use it later even if it is needed," she said.